Sparks are Flying in the Metal Shop

The Metal shop is busting out projects and raising lots of money.  Shop teacher, David Dever, is trying something new with the advanced class.

Normally every year the advanced students in metal class would have to fund their own project and make something they want, but this year Mr. Dever offered students a second choice, to work for him and make a specific project for him to sell for the shop funds.  It seems to have been a hit because almost every advanced student took the offer up.

The class was separated into two groups, one began working on any horseshoe projects and the other worked on signs.  Both groups began the design process, drawing up designs and showing them to Mr. Dever for him to approve and start gathering orders for.  The design that was chosen for the horseshoes was a snowman and over 20 orders were received from all the schools.

The metal signs only received 3 orders, one pre-made and two that wanted a custom-made sign based on their design.  The snowmen sold for $20 a piece and the signs sold for $30 per square foot. 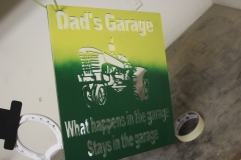 It seemed to work out because they met their deadlines and made their customers happy. Mary Buckallew ordered a snowman from the metals class, “It was definitely worth the money and now I am using on my desk as a book holder because it’s made of horseshoes, so it’s heavier and it’s good at holding the heavier things down,” she said.

Another customer, Ms. Courtney Daniel, ordered a metal sign from the shop.  She ordered a pre-made sign with a slight change, instead of a car front on the sign, she wanted a John Deere tractor in its place.  She also requested that it was painted John Deere green and yellow.

“I loved it and my dad opened it and said that he loved it and he has plans to put a box around it and put lights around it so that it lights up, so he even made it into his own project of his own,” Ms. Daniel said.

The idea was a success, earning the shop over $600 that they can now use to upgrade their gear.  They will be selling more for the upcoming year, and suggestions are being accepted and created.

If you would like more information about designs or upcoming projects, or you would like to place an order, then people should contact Mr. Dever with either his email (deverd@umatillasd.org) or find him in person and discuss it with him.